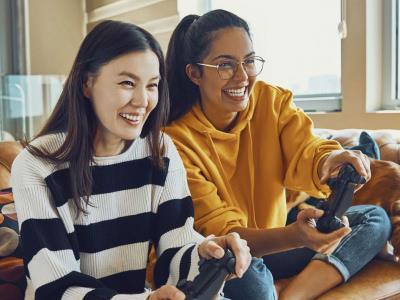 The 8th of March every year is International Women's Day, a perfect excuse for us to take a look at the diversity of female talent within the gaming industry and the initiatives and programmes that are looking to champion women in an industry where they continue to be under-represented.

Many studies have been done over the past decade to have a look at who gamers are world-wide, and study after study has found that women make up around half of all gamers. Despite this, the stereotype that gaming is only for teenage boys is still prevalent. Even though women make up half of gamers, they only make up around 12% workforce that actually create games. This is an imbalance that Girls Make Games are looking to redress.

Laila Shabir and Ish Syed launched the programme to encourage girls everywhere to consider a career in computer sciences and to show just how creative those male-dominated fields can be. Since it launched in 2014 the Girls Make Games summer camps, workshops and game jams have reached over 5,500 young women in cities around the world. Some of the biggest names in the industry have backed the programme including Xbox, PlayStation and Google Play.

G into Gaming is an initiative run by amiqus, as specialists in gaming recruitment they take their responsibility for inclusion and diversity seriously. Their mission is to provide a platform to help accelerate changes in the industry and make sure that gender balance is a top priority in games companies. You can fill in their survey and get involved with the initiative on their website.

Women in Games is a not-for-profit organisation that champions women in video, mobile, online games and esports. They look to keep the subject of diversity in the workplace at the forefront of studios mind's when it comes to hiring and retention of women in the gaming industry.

Every year they host the European Women in Games conference in London, aimed at celebrating gaming achievements and industry figures, employers, professional bodies and future stars of the industry that are making strides by including women in the picture.

Women in Gaming: 100 Professionals of Play

To see what an amazing impact women have had on the industry take a look at Meagan Marie's book, 'Women in Gaming: 100 Professionals of Play'. It features contributions from women at every level of the industry, and some of their biggest achievements. To give you an insight into some of the challenges women face the 'Day in the Life' section gives you a taste of what goes into making some of the biggest games on the market, from the women who were actually there.

Want to check out some more amazing women in gaming this International Women's Day?

Twitch are highlighting female streamers this month on their front page while also raising money for the 1000dreams BroadcaseHER grant. Check out their Creator Takeover throughout the month of March.

Check out the Women in Gaming initiative from Team Xbox on their website, social channels and with monthly streams featuring women in gaming and tech on Mixer.

You can watch some great interviews with prominent women in the industry talking about gender representation. Such as Bonnie Ross, Vice President of Microsoft Studios and Head of 343 Industries, talking about diversity attracting diversity and even just talking about her career as a whole. A must watch for any ambitious women wanting to make it in the games industry.

You can also download a free International Women's Day theme for your Playstation today, featuring some of the most well-known women in recent games.