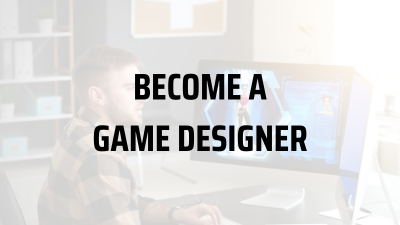 What exactly is a Game Designer?

If you’re looking for a job in the video games industry but unsure of what area would suit you most, read on as we investigate the Game Designer role in more depth.

So just what is a Game Designer?  Well, it’s the role that’s in charge of the storylines and game plots, spending most of the time looking over the levels, environments, and everything else in-between.  Game Designers are essentially the driving force behind a game’s creation and will spend most of their time overseeing and collaborating with other specialisms such as the game artists and developers.

It’s worth noting however that the job descriptions you may see can vary depending on the studio size and the situation they have internally.  For instance, it really isn’t that uncommon for game designers to have to focus and specialise on one area.

Depending on the studio’s requirements, a game designer could have the responsibility of creating the games foundation, enhancing user experience and/or even mastering the overall game execution.

Defining the role of a game designer can be hard due to the range of work covered, and again, depending on the studio requirements.  However, there is an easier way to look at the role and that is by dissecting it into layers.

As you could probably guess by the subtitle.  Game designing requires some creativity.  Working with artists, narrators, music technicians and much more, there is always something to get your creative juices flowing.  When it comes to the actual grouping of this area within the role, you could look at 3 specific areas.

Just as the title explains, Level/Environment Designers do just that.  They work on the levels and focus on the details in any of the objects, events, actions and/or the environment of a level.  Often, the sometimes work on the actual character designer and behaviour too!

Level designers can have a range of different tasks based on the studio that they work for, on the whole however, it’s usually a good idea to possess some knowledge of programming and scripting languages if you do want to be a level designer.

There’s much more to the Narrative designer than just telling a story.  You’ll need to work with the team to create characters, rules of the game, events and even the mechanics.  The main aim? To ensure that the storyline is understood and followed through the whole game.  To get into this field, many start out in creative writing and slowly build up their portfolio with storylines and scripts.

Focussing on what the player is going to do during a particular mission or level is the job of the Mission Designer.  Overlooking things like gameplay objectives and any combat within the level are all things that will need to take focus of the mission designer, making sure that the game remains interesting to the player!

Some job titles may overlap and that is often the case with mission designer and level designer.  Having game designer experience and that you’re familiar with scripting languages and open-world mission design is a huge plus when looking to get into this field, however, having experience in working with or within a design team can also help.

There is much more to getting into game design as we will uncover later.  As for now, if you are still on the hunt for your next role, we have over 3,500 live vacancies available.  Click here to find your perfect Game Designer role.